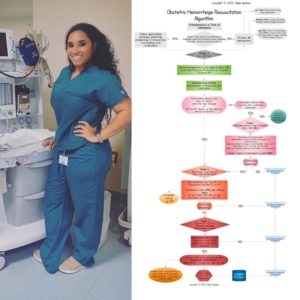 The title of her doctorate capstone project titled, Development of Algorithm for Postpartum Hemorrhage Resuscitation

The DNP Project has to be one of the biggest worries of most students entering into a DNP Nurse Anesthesia program. On top of a rigorous curriculum and demanding clinical schedule, you have to complete a project proposal, project defense, and a final paper usually totaling over 100 pages. Although tedious and often stressful, it can be done! With only 4 months until graduation, I completed my final defense January 23rd and while I thought it was over, I quickly realized it was anything but.

My DNP project was the ‘Development of an Algorithm for Postpartum Hemorrhage Resuscitation’ for anesthesia providers. With the United States having the highest rates of maternal mortality in the developed world, I was inspired to create an algorithm for a clinical site after discovering there was not one in place. My entire project was the development, appraisal, and encouraged use and education of the algorithm. I developed an algorithm using the American College of Obstetricians and Gynecologists guidelines and updated evidence-based research. I built a project team comprised of obstetric CRNA’s and content experts and guided them through the evaluation of the developed algorithm using the AGREE II tool to ensure quality and rigor. And I completed my project by providing education at the clinical site and having the algorithm printed for easy access within the unit and operating rooms where cesarean sections were performed.

Over the course of my doctoral work, I have waxed and waned with various topics to complete a project on. While obstetrics was not my strength, doing a project on this population challenged me in more ways than one to expand my knowledge on the topic. Crisis response is a critical part of our practice. While calling for help early during emergencies is encouraged, it is your responsibility as an anesthesia provider to remain calm, implement appropriate interventions, and ultimately maintain the safety and health of your patient(s). Being that this project meets such a need in the obstetric population, I am looking forward to moving towards publication through the American Association of Nurse Anesthetists. While many students find the DNP project time consuming and cumbersome (and I would agree), the process teaches you vital steps in researching, evaluating, and implementing evidence-based change in the clinical setting. This is what sets you apart as a doctorally prepared Nurse Anesthetist. 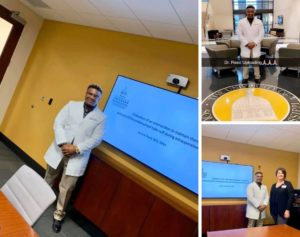 As per Dr. Jamare Reed, SRNA, DNP Capstone Project: Evaluation of an Intervention to Maintain Therapeutic Pressure of the Endotrachael Tube Cuff During Intraoperative Surgery

Reflecting on his glorious journey  When I was in a group home as a foster care child of Mississippi, I had dreamed and dreamed and wished and prayed to be in this position. I put my heart and my soul into this vision. I don’t know how to start but never give up on a dream because of the time it will take to accomplish it. The time will pass anyway, whether you are working towards your dream or not. I had all the justifications to giving up by throwing the towel.

However, I have emerged from the mud and the struggle. With a little dedication and hard work, I changed my outcome. I am one step closer to my goal. I must keep grinding like an old pair of brakes. I thank everyone who has support, push and encourage me over the years. DR. REED UPLOADING