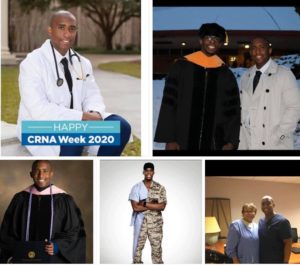 As per Dr. Guerrier:
This year will be my first CRNA week I can officially celebrate as a CRNA! For Mentor Monday I want to give a special shoutout to my mentor @jwii__ . I met Captain James Winters II, DNP, CRNA at a Diversity CRNA conference in April 2016. Little did I know, January 2017 Captain Winters would be my roommate for my first year of CRNA school. Even though he was busy studying for boards and preparing to defend his DNP project, he spent that year mentoring me, quizzing me, and guiding me to ensure I was ready to enter the clinical world.

So I just want to say thank you to Dr. Lena Gould, EdD, CRNA, FAAN @lenagould for creating Diversity CRNA and for connecting me with Captain Winters. I attribute a lot of my success to them.