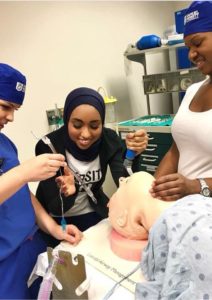 This past week, I was accepted into the University of Maryland’s Doctorate of Nurse Anesthesia program. I doubt I would be celebrating my acceptance with my family and friends if it was not for the Diversity in Nurse Anesthesia Mentorship program.

As a nursing student in 2015, I attended my first Diversity CRNA Information & Airway Simulation Lab Workshop at the University of Maryland. It was there that I was able to network with various ICU nurses, SRNAs, and CRNAs. I was able to learn about the rigors of anesthesia school both in the classroom and clinical from SRNAs and program directors and the best ways to prepare. I also had the invaluable opportunity to learn how to intubate mannequins using laryngoscopes, how to insert central lines, spinals, epidurals, how to identify the brachial plexus on an ultrasound to do a neuromuscular block, and perform a cricothyroidotomy. All of which I was able to speak to in my essay.

READ MORE
It was there that I also met two University of Maryland SRNAs, Jahnavi Jaladanki and Irene Tavakoli (now CRNAs). They advised me over the last two years on how to make the most of my ICU experience, set myself apart on my application, and how to prepare for my interview. I also met Terry English, CRNA who became a beloved mentor. He gave me the opportunity to shadow multiple times over the last few years and even wrote me a recommendation letter when I applied.

In July of this year, I decided to attend another Diversity CRNA Information & Airway Simulation Lab Workshop at Samuel Merritt University now that I had become an experienced ICU nurse. It was there that I reconnected with Israel Akpadiaha, PhD, CRNA who encouraged me to apply this year and not wait another year. In front of everyone, he told me that he expected my essay in his inbox by that Friday.

I also listened to him and Mohammed Deen, SRNA talk about how we should get involved in our local AANA chapter as advocacy would become an important aspect of our future profession. I then attended the Maryland Association of Nurse Anesthetist Fall Meeting this October and introduced myself to some of the faculty at UMD and John Bing, CRNA who then spent an hour on the phone with me the following week helping me prepare for my interview.

During my interview, the program director Dr. Pellegrini had a slide describing how diverse their program was and how they had held a few Diversity CRNA events. It was then that he asked if I had attended one because he felt like he recognized me, I pointed to his slide and said “I’m in the picture – in the back! You taught me how to use the ultrasound”. Now I’ll have the opportunity to have him and the other faculty teach me so much more.

These are just a few ways the Diversity CRNA Mentorship program has impacted me, but there are countless more. I’ve been working towards this since I was 15 years old and to see it come to fruition is a dream come true. The road would have been 10x harder had the mentorship program not existed. For that reason, I’m so incredibly grateful for Dr. Lena Gould, CRNA, FAAN and all the work she has done. I plan to pay it forward as both an SRNA and CRNA in the future through both mentorship and advocacy for the profession. Thank you, truly…