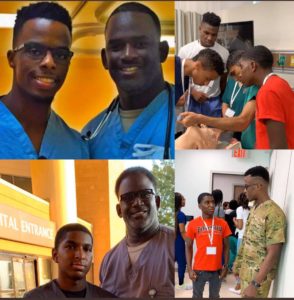 Amongst the 160 RN attendees, this 12th grader was the only high school student in attendance who learned about nurse anesthesia and Doctorate education.

During the information session, he learned about entering nursing school, securing a critical care position, scheduling the CCRN Exam, GRE preparation, and the importance of shadowing a CRNA.

During the Airway Simulation Lab, this young man was able to intubate a mannequin via fiber-optic scope, inserted a spinal, nasally intubated a mannequin, witness an anesthesia machine check, and more!

The best part, he had fun and was able to meet Black male CRNAs. One of the Black male CRNA’s is from his home state of Mississippi, Captain Dr. James Winters who exchanged his contact information with his mother. . .
This future CRNA left the event with a CRNA mentor who mirrors him and will follow in his footsteps.

Profound.
During Christmas break, this high school student shadowed Julian Carter, CRNA, MSN in the operating room. Mr. Carter mentored Captain Dr. James Winters, DNP, CRNA (US Air Force) when he was in college after being told of his dream to be a Pharmacist. Mr. Carter invited James into the operating room to shadow to see a full day of responsibilities as a CRNA. That shadowing experience ultimately changed his career trajectory.

Now, imagine this post years from now when all three of them are in the same picture as he graduates as a doctorate prepared Nurse Anesthesiologist.
BRAVO!!